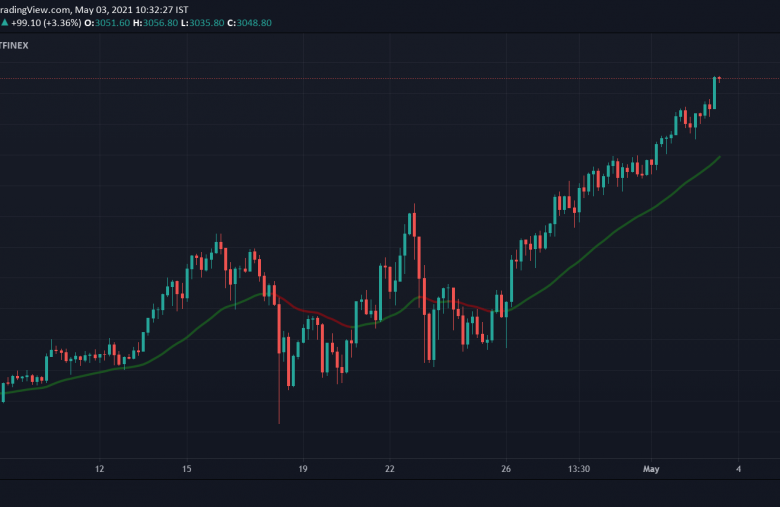 Ethereum, the world’s most-used blockchain by daily transactions and the second-largest by market cap, broke the $3,000 price level in the early hours Monday, data from multiple sources shows.

#ethereum has officially cracked the $3,000 mark!!! Not on all exchanges, but this is a big moment.

Its native token, ETH, powers the network and facilitates millions of other decentralized applications (dApps) and protocols that run atop. With the rise of decentralized finance (DeFi)—over $70 billion is now locked in such apps—and other ground-breaking innovations in the past year, demand for ETH continues to grow.

As the below image shows, ETH broke out of its $2,600 resistance zone last week and inched upwards steadily. It saw some resistance at the $2,950 level, but saw massive buys in the Asian hours today. As such, ETH remains in a strong uptrend, as the exponential moving average, a popular tool used by traders to determine market trend based on previous average prices, shows.

Some wealth managers say the move is “catch-up” to Bitcoin’s price action over the past year. “At first, the rally was really led by Bitcoin because like a lot of the institutional investors came into the space, that would be their natural first port of call,” said James Quinn, managing director at crypto fund Q9 Capital.

“But as the rally has matured over the last six months, you have DeFi and a lot of DeFi is built on Ethereum.”

Several Ethereum-based exchange-traded funds (ETFs) and products (ETPs) have launched in the past year, suggesting there was a significant amount of institutional inflows into the asset apart from Bitcoin.

Meanwhile, some on Twitter pointed out Ethereum’s total market cap, a measure of price and the total supply (115 million at press time) now surpassed those of the Bank of America, one of the world’s biggest financial institutions.

#Ethereum has a bigger market cap than Bank Of America 🔥🔥 historical moment in history pic.twitter.com/R29QJDBpWc

An iconic day for many in the crypto space.