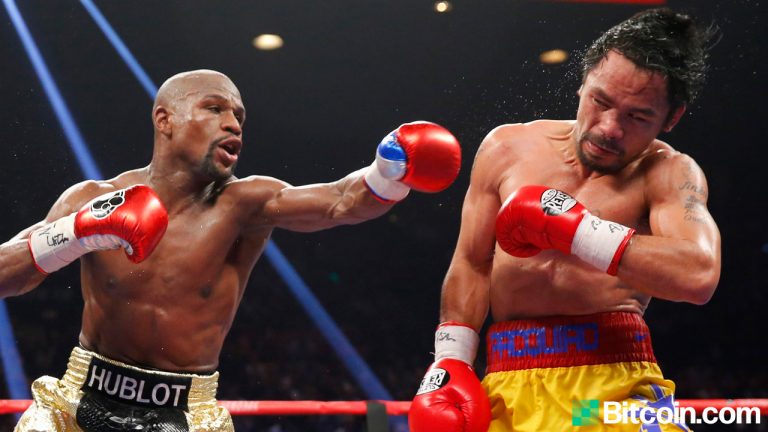 The undefeated professional boxer Floyd ‘Money’ Mayweather recently spoke at the Bitcoin 2021 conference in Miami and was booed while speaking on stage. Mayweather’s speech wasn’t appreciated by members of the crowd because he didn’t discuss bitcoin much and toward the end, Mayweather said he believes another crypto will be “just as large as bitcoin someday.”

Attendees at the Bitcoin 2021 Conference Disliked the Boxer’s Opinion

Boxing legend Floyd Mayweather has been a fan of digital currencies for a long time now, as the boxer has participated in an initial coin offering (ICO) and recently released non-fungible token (NFT) collectibles. Mayweather is preparing to have a boxing match with the Youtuber Logan Paul, and recently spoke at the Bitcoin 2021 conference in Miami.

.@FloydMayweather knows the #flippening is inevitable

During Mayweather’s talk on stage, he discussed how blockchain technology and things like NFTs are changing the game. The legendary boxer did not talk about bitcoin (BTC) much, even though the event organizers had tried to keep the conference “bitcoin only.”

The Bitcoin 2021 conference organizers say: “Save conversations about other protocols and cryptocurrencies for outside the conference.”

In fact, the conference agenda notes that attendees should take altcoins discussions outside the event. However, the first day of the Bitcoin 2021 conference shows it was impossible to stop discussions concerning decentralized finance (defi) and topics like NFTs.

‘With or Without Any Cryptocurrency, Floyd Mayweather’s Going to Be Okay’

Mayweather was also wearing an “Ethereummax” t-shirt while speaking, which is the ERC20 token team that is sponsoring Mayweather’s bout with Logan Paul. Toward the end of the discussion, Mayweather told the crowd that he believes at some point in time another digital asset will be just as big as bitcoin.

While Mayweather said his statement, a portion of the crowd booed the undefeated boxer because they didn’t like what he had to say.

“Everybody in the crypto world is competing with one another, whereas I feel like everybody should be able to choose what they want to choose and go with who they want to go with,” Mayweather said, emphasizing that people should work together. “I believe there’s gonna be another cryptocurrency just as large as bitcoin someday,” he added.

As soon as he made this statement, boos from the bitcoin maximalist crowd started. However, Mayweather responded fast and said he had a right to his own opinion and others have that right as well.

“Without crypto…,” Mayweather concluded. “Without no cryptocurrency, I was able to make a billion dollars. With or without any cryptocurrency, Floyd Mayweather’s going to be okay,” the famous boxer told the crowd.