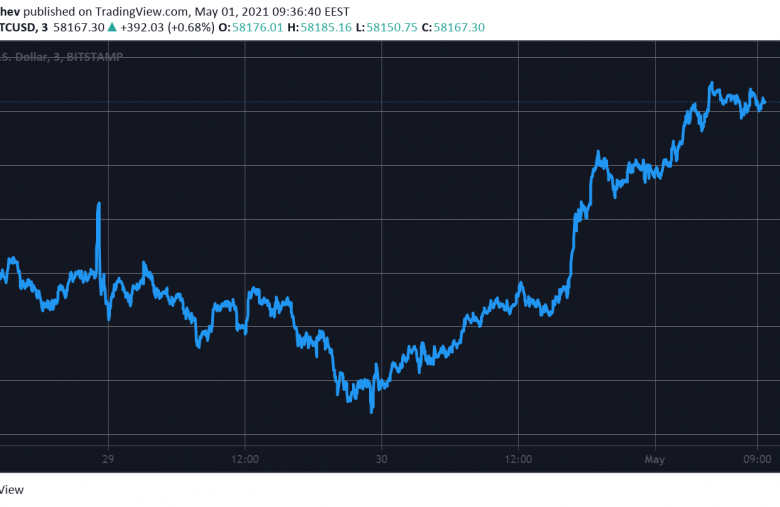 Following several days of consolidation around and beneath $55,000, bitcoin finally made a move and jumped above $58,000. Despite new records for Ethereum and Binance Coin, BTC actually managed to reclaim some of its recently lost market dominance.

While the altcoin market was producing impressive price pumps lately, bitcoin seemed stalled at best. The primary cryptocurrency had recovered from its April slumps that drove it below $50,000 but had failed to increase any higher than $55,000.

The bears used BTC’s inability to breakout and pushed it south again to about $52,000 on April 29th. Since then, though, the trend reversed, and bitcoin recovered a few thousand dollars in hours.

Consequently, the asset traded around $54,000 before it finally made a notable move upwards. In a matter of hours, the cryptocurrency surged by about $4,500 and reached its highest price tag since the market crash on April 18th.

On its way up, bitcoin’s market cap solidified its position well above $1 trillion. Additionally, BTC recovered roughly 1% of its recently lost market dominance which is now up to 49%.

New ATHs for BNB and ETH

As mentioned above, most alternative coins have been on a roll lately, perhaps none more impressive than the second-largest cryptocurrency. Ethereum has marked consecutive new records in the past week or so, and it doubled down on this tradition.

In the past 24 hours, ETH spiked to its latest ATH of just over $2,870 (on Bitstamp). Similar development befell the third-largest crypto – Binance Coin. BNB flirted with $600 yesterday but jumped with over $40 in hours to a new record of about $645 (on Binance).