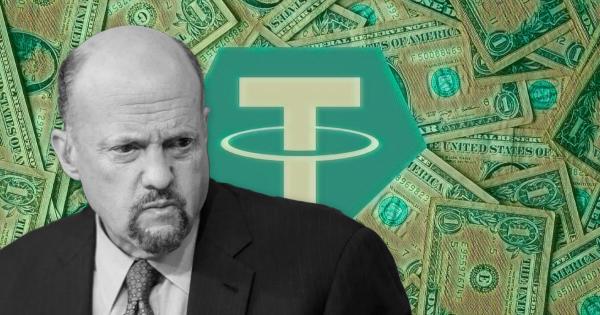 Despite positivity surrounding USDC, Tether is the top dog, and based on current metrics, will remain that way for the foreseeable future.

Triggered by this week’s sell-offs, Jim Cramer expressed his concerns that Tether, as “the Achilles heel” of cryptocurrency, brings further risk exposure to markets.

“Tether, which is the giant stablecoin, could be basically the Achilles heel of the entire Bitcoin operation, which is very worrisome because we don’t know what they own,” he told The Street.

This comes as Circle’s USDC stablecoin gets the nod from auditors Grant Thornton, who signed off on its Account Reserve Report.

Tether FUD is nothing new. Indeed, worries that USDT issuance is not being 1:1 backed by dollars (or similarly liquid assets) have since been proven true. Yet, remarkably, “getting caught out” doesn’t seem to affect its standing.

Nonetheless, with USDC emerging as a worthy contender, is Tether’s time at the top finally done?

It’s unbelievable most people are not concerned about Tether

Last month, Eric Rosengren, the President of the Federal Reserve Bank of Boston, called Tether out, saying it isn’t good for the stability of the financial system.

More specifically, Rosengren was referring to the potential impact the leading stablecoin could have on the short-term credit market.

“The reason I talked about Tether and stablecoins is if you look at their portfolio, it basically looks like a portfolio of a prime money market fund but maybe riskier.

[Tether] has a number of assets that, during the pandemic, the spread got quite wide on those assets.”

In other words, Rosengren pointed out that a significant proportion of Tether’s reserve assets may not return their stated yield during a mass sell-off. Such as in the case of a “bank run,” where USDT holders want to exchange for dollars in mass.

All of this came about following its settlement with the New York Attorney General (NYAG). Tether execs agreed to submit regular reports including on the composition of its reserves.

Having released its first report in May this year, observers noted 76% of reserves is made up of “cash and cash equivalents.” But a further breakdown of this shows less than 4%, of that 76%, is cash.

Speaking to ex-CFTC Chair Timothy Massad, Crammer raised the point that Tether was effectively “kicked out of New York” by the NYAG. He added that it’s almost unbelievable that more people aren’t concerned.

“Then I read that New York, that AG settlement, they’ve been basically kicked out of Wall Street, of New York. To me Tim that’s highly unusual, and you went to law school with me, if New York decides you can’t do business here shouldn’t we be more worried than most people are about this?”

USDC gets the nod from Grant Thornton

In a bid to overthrow Tether’s dominance, USDC is emerging as a possible candidate.

Yesterday, Mastercard announced a pilot program, in partnership with Circle and others, including Paxos, to further integrate cryptocurrency and legacy payment rails.

Essentially, this means USDC will act as a bridge between fiat and other cryptocurrencies in the new system. Raj Dhamodharan, the Executive Vice President of Digital Asset and Blockchain Products, said:

“Through our engagement with Evolve, Paxos, Circle and the larger digital assets community, Mastercard expects to deliver on our promise of consumer choice to provide options to people around the world on how and when to pay.”

As well as that, accounting firm Grant Thornton signed off on USDC’s Reserve Account Report last week. They commented that US dollar-denominated assets held in segregated accounts fairly reflect the $22 billion of USDC in circulation.

At present, USDT market cap and 24-hour volumes still dominate those of USDC. As such, despite the positive developments, a flippening won’t be happening anytime soon.