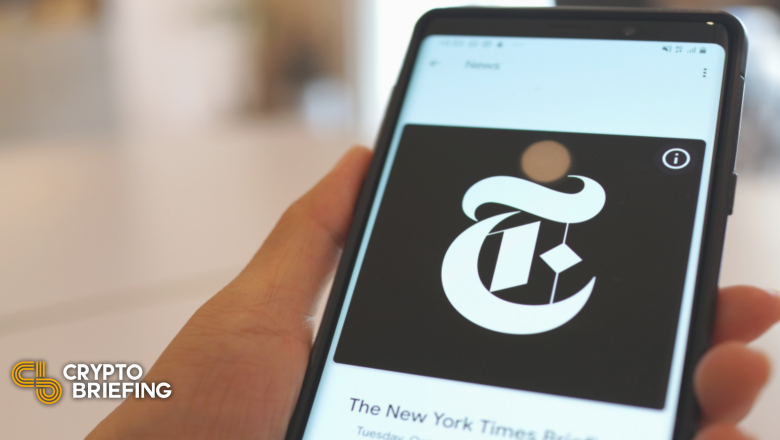 New York Times tech writer Kevin Roose has tokenized one of his columns on Ethereum as a non-fungible token (or NFT).

The buyer who places the winning bid will receive an Ethereum token that includes an image of the article itself. They will also be featured in a follow-up article and will receive a congratulations message from Michael Barbaro, the host of the New York Times’ daily podcast.

The NFT will not include copyright or reproduction rights; however, it will presumably be freely tradeable, just like other NFTs.

Roose stated that the biggest perk is “is owning a piece of history.” He noted that if NFTs become more popular, buying the NFT would be akin to “owning NBC’s first TV broadcast or AOL’s first email address.” However, he also admitted that NFTs could be a short-lived fad and that the token may not maintain its value.

Proceeds from the sale will be converted to U.S. dollars and donated to the The New York Times’ Neediest Cases Fund, which has raised more than $300 million since it was established in 1911.

Roose is auctioning his NFT on Foundation, a marketplace for Ethereum-based NFTs. At the time of writing, the token had attracted a maximum bid of 3.75 ETH ($6,300). Bidding ends at approximately 9:20 AM PST on Thursday, Mar. 25.

The news comes just days after TIME announced plans to tokenize one of its most famous magazine covers. As publication-wide efforts, those tokens have attracted somewhat higher bids, currently in the 11 ETH ($18,300) to 35 ETH ($58,300) range.