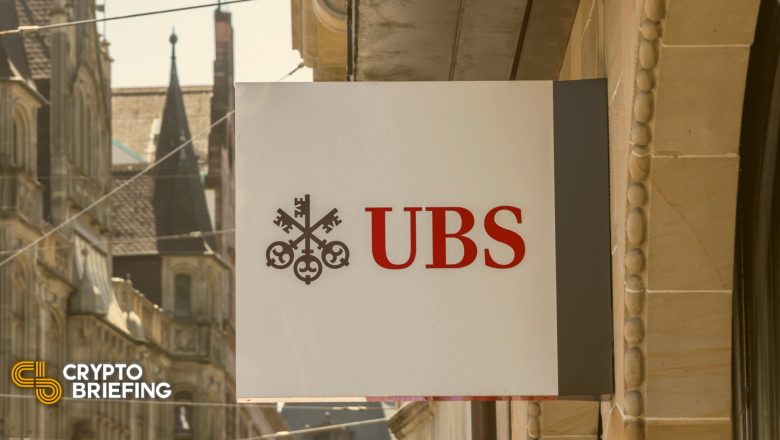 Swiss-based bank and financial services provider UBS Group AG looks to be the next to enter the fold. Reports released to start the week state that the banking behemoth is considering several different alternatives to offer digital currency investments.

The news comes not long after major US-based firms, such as Goldman Sachs and Citi, have been associated with similar moves. Goldman recently opened up trading with non-deliverable forwards tied to Bitcoin, Citi has been reported to be considering crypto services, and Morgan Stanley and Bank of New York Mellon are getting involved as well. Goldman’s crypto desk came back open being put on hold for roughly three years.

In a statement, UBS Group representatives said “we are monitoring the developments in the field of digital assets closely. Importantly, we are most interested in the technology which underpins digital assets, namely the distributed ledger technology”. According to the Bloomberg report releasing the news, UBS Group spends roughly $3.5B USD annually on technology maintaining and modernizing existing infrastructure and innovating new tools for employees and products for clients.

Also cited in the report was news that Swiss competitor Julius Baer is discussing offering clients access to crypto access.

UBS is reported to be strongly taking in consideration the volatility of cryptocurrencies, and accordingly will likely be allowing just a small portion of clients total wealth for a crypto investment offering. Additionally, the firm will only be allocating the investment to it’s wealthier asset class. Options for these investors will likely include investing through third-party investment vehicles.

The news comes just a few months after UBS Group suggested concern in published guidance for clients. In the published report, the firm stated that they “wouldn’t rule out further price increases” but that they were also “skeptical of any essential real-world use cases”, driving difficulty for the firm to “estimate a fair value for Bitcoin and other cryptocurrencies”. The report added that there is “little in [UBS] view to stop a cryptocurrency’s price from going to zero when a better designed version is launched or if regulatory changes stifle sentiment”.

UBS is Switzerland’s largest investment bank by total assets, and offers a bevy of financial services. This move would be the first of it’s kind for UBS, but other Swiss banks (outside of the aforementioned Julius Baer) are also looking to get aggressive in the cryptocurrency space, such as Swissquote, which partnered with digital assets provider Taurus last month. Switzerland recently introduced legislation that opened the door for blockchain finance into legal code.