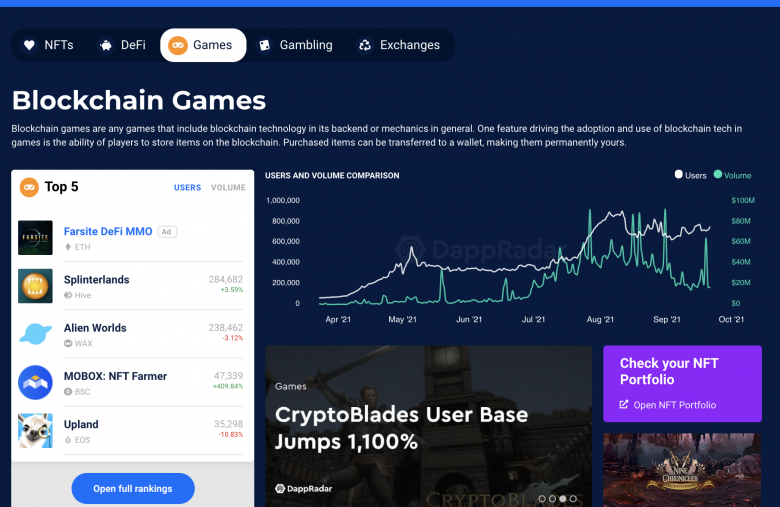 Industry interest is shifting towards games

The number of Unique Active Wallets linked to game dapps was up 64% from the previous month. In that period, NFT and DeFi unique wallets increased by just 6% and 3% respectively. Most blockchain users are millennials between 25 and 34 (37% of all users), followed by Generation Z (18-24 years). NFT and game dapps generate just over 40% of the click-outs respectively, compared to 46% in June this year. DeFi generates only 18%, down from 54% in June.

With over 120,000 users, the US boasts the biggest blockchain audience, but Asia is well represented too. Three-quarters of DappRadar’s users were men back in August, when the previous report came out. More and more women are signing up.

DappRadar also published a BGA blockchain gaming report recently to complement these findings. They found that the sales volume generated by in-game NFT items was an impressive $918 million. In terms of daily unique active wallets, the blockchain industry recorded a 18% increase from August. In that month, Axie Infinity (AXS/USD) generated over $765 million in sales volume. By the end of the month, it remained the most valuable collection with over $1.7 billion in sales.

DappRadar spokesperson Modesta Jurgeleviciene commented on the findings of the reports:

“August confirmed a trend we started observing in July — that dapp users are increasingly shifting their focus to gaming and NFTs, and less so on DeFi. Looking at the consumer behaviors behind those numbers makes the gaming segment all the more promising. We’re seeing the beginnings of truly global adoption and something that I’ve wanted to see for a while — a growing number of women slowly but surely entering the blockchain space and, with it, gaming. The play-to-earn movement is becoming big enough to drive emerging economies. I think it has the potential to also close the gender gap.”