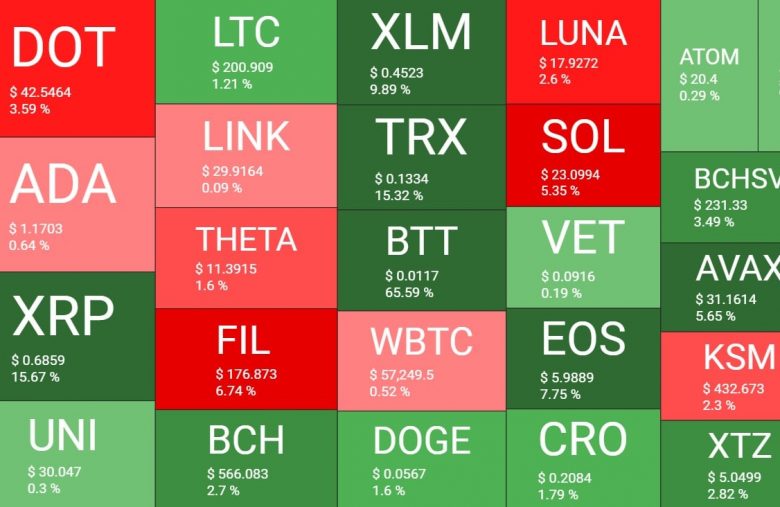 Bitcoin continues to suffer below the coveted $60,000 and stands about three thousand dollars below after another slump. As such, its dominance has declined even more as some altcoins have marked serious gains. Ripple leads the larger-cap pack with a 17% daily surge to just shy of $0.70.

The past few days have been somewhat stagnant for the larger-cap altcoins as most have failed to display any significant price movements. The situation is relatively similar in the past 24 hours.

However, Ripple has outperformed all top-ten altcoins. The payment processor’s native digital token, XRP, has surged by roughly 17% to above $0.68. This is the highest price tag the asset has seen since early February when it pumped above $0.70 briefly.

Somewhat expectedly, lower- and mid-cap altcoins are even more fluctuating. WazirX leads the way with a massive 220% surge in a day and an over 1,000% increase in a week to $5,50.

The skyrocketing lower cap alts have helped the crypto market cap to remain above $1.9 trillion.

The primary cryptocurrency has failed repeatedly to overcome $60,000. Bitcoin initiated several such attempts but to no avail so far.

The last one drove the asset $3,500 down, as BTC has yet to recover from this steep price decline. In the past 24 hours, bitcoin went to a daily high of $58,500 but has dropped again and currently struggles to remain above $57,000.

BTC’s indecisiveness has given the alts an opportunity to reduce its dominance over the market further. The metric comparing bitcoin’s market capitalization with all other crypto assets is down to 56%, according to CoinMarketCap. Just a few weeks ago, it was well above 60%.