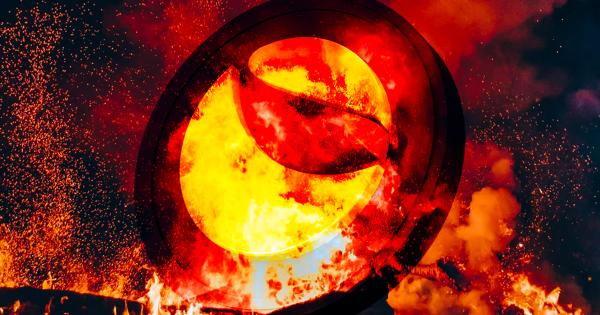 Burning almost 90 million LUNA in the community pool is expected to place upward pressure on the native token’s price.

Do Kwon, co-founder and CEO of Terraform Labs, the South Korean company behind the blockchain project Terra (LUNA), recently announced on Twitter that the on-chain vote for the project’s proposal 44 will be initiated on Wednesday and will be in a voting period for two weeks.

The proposal to initiate the burn of 88,675,000 LUNA from the community pool to mint 3 – 4 billion UST will reduce the native token’s total supply by more than 9%.

Following the successful launch of the network’s cardinal upgrade, dubbed Columbus-5, the community pool will be swapped out for Terra’s native stablecoin, UST.

Minted UST will be used to bootstrap Ozone, an insurance mutual protocol that facilitates levered coverage of technical failure risks in the Terra ecosystem.

“Since the LUNA price and amount in the Community Pool has changed drastically since Prop 44, the resultant UST minted from the burn will go to the Community Pool, with the community deciding how much to deploy to bootstrap Ozone via a separate proposal once Ozone goes live,” Kwon added on Terra’s Agora, where he broke down the execution plan.

The proposal will also leave 10 million LUNA in the Community Pool.

According to Kwon, enacting the proposal will reflect on swap fees, “due to the changes implemented in Col-5, where all on-chain stablecoin swap fees are routed to the oracle_rewards_pool for validators.”

“A byproduct of this operation is that a lot of swap fees will accrue,” he explained in a tweet, adding that as a result LUNA staking rewards are expected to increase five times.

Next week, we will uphold @terra_money signal prop 44 and initiate a proposal to burn 90M Luna in the community pool to mint $UST for Ozone.

This will reduce Luna total supply by 90M, and increase $UST supply by roughly 3-4 billion. pic.twitter.com/Wahn9IWNoK

TVL on Terra reached an ATH

Following last week’s integration of the IBC protocol and launch of Wormhole V2 support for Terra, the total value locked (TVL) in protocols on the network reached a new all-time high.

Last week, TVL on Terra reached $10.22 billion, with protocols Anchor, Lido, Mirror and Terraswap accounting for more than 90% of the sum, according to data from DeFi Llama.

Currently, with $9,97 billion, Terra ranks as the fourth blockchain with the highest TVL, following Ethereum, Binance Smart Chain, and Solana.