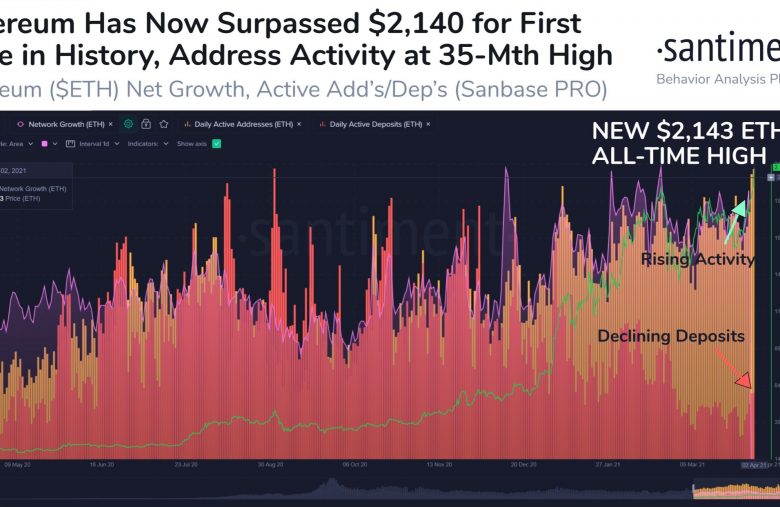 Ethereum has stolen the show in the past few days price-wise as the asset surged to a new all-time high at around $2,150 (as of writing these lines). While this may be surprising to some, on-chain data reveals the rapidly growing adoption of the network behind the second-largest cryptocurrency with new records for active addresses.

The date was March 24th, and a market-wide correction wiped billions off the entire crypto space. Ethereum price was no exception as ether slumped to just above $1,520.

However, the situation changed drastically in the following days, and ETH started an impressive ascend. Following several consecutive occasions of closing with green daily candles, the asset’s price reconquered $2,000 and only continued upwards.

ETH painted a new all-time high, and now the latest record is at roughly $2,150.

On-chain data presented by two analytics resources, namely Santiment and Glassnode, shows that this notable price increase could have been expected to some extent due to the rapidly rising network activity.

Santiment provided a broader perspective on three bullish developments. The company said that the number of newly-created daily addresses and the active address had skyrocketed lately, which the firm has repeatedly outlined in the past that could prompt a price increase for the underlying asset.

🎉 Updating our previous update, #Ethereum has now skyrocketed to ANOTHER new #AllTimeHigh of $2,143. Our $ETH data provides a textbook 101 example of why:

At the same time, the ETH deposits on cryptocurrency exchanges have declined in the past few weeks, suggesting that there’s little sell pressure for the asset.

The trend has only intensified, Glassnode said, as such wallets have exceeded 56,500,000. The 7-day moving average of the number of newly-created addresses also reached a monthly high of over 6,300.

While Santiment noted that the exchange deposits have declined, Glassnode informed that the withdrawals have increased. The number of transfers out of trading venues has surged to a monthly high of nearly 1,400.