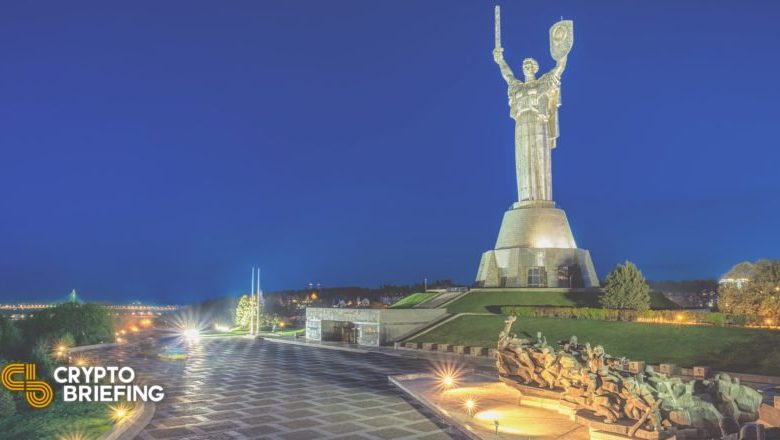 After the crypto community donated millions of dollars worth of Bitcoin and Ethereum to Ukraine to help fund its war efforts, the government has now posted a plea for Polkadot and hinted at a possible airdrop.

Polkadot’s Gavin Wood pledged to donate $5 million worth of DOT over the weekend.

Ukraine isn’t just looking for Bitcoin, Ethereum, and Tether to fund its defense against Russia—the government is now accepting Polkadot donations too.

The people of Ukraine are grateful for the support and donations from the global crypto community as we protect our freedom. We are now accepting Polkadot donations too: $DOT: 1x8aa2N2Ar9SQweJv9vsuZn3WYDHu7gMQu1RePjZuBe33Hv.
More cryptocurrencies to be accepted soon.

Ukraine’s official Twitter account posted an update on its crypto campaign Tuesday with a link to a Polkadot address. “The people of Ukraine are grateful for the support and donations from the global crypto community as we protect our freedom. We are now accepting Polkadot donations too,” the post read. The account also confirmed that it would soon accept other cryptocurrency donations. Subscan data shows that the address has received 11,372 DOT worth about $214,035 at press time.

The update comes after Polkadot creator Gavin Wood posted a tweet in response to Ukraine’s recent plea for Bitcoin and Ethereum donations. “If you post a DOT address I’ll personally contribute $5m,” he wrote Sunday, prompting a backlash from many crypto enthusiasts, who accused him of indulging in self-promotion. Ukraine shocked the crypto world Saturday when it announced that it was accepting cryptocurrency donations with a link to a Bitcoin and Ethereum address. Donations flooded in soon after. By the end of the weekend, the addresses had received over $10 million, most of it in Ethereum’s ETH currency. Now, the government has received closer to $17 million in crypto assets across the Bitcoin, Ethereum, and TRON networks (TRON’s Justin Sun rushed to join in with the fundraising efforts following Ukraine’s Saturday post).

Interestingly, Ukraine posted a cryptic follow-up tweet to its initial request for DOT tokens, hinting at a possible airdrop. “An airdrop has not been confirmed yet,” the message read. Three Arrows Capital co-founder Su Zhu responded by suggesting that the nation could be preparing to drop crypto tokens to its citizens, similar to how El Salvador airdropped $30 in Bitcoin to Salvadorans after it made Bitcoin legal tender last year. “Making history here if it does end up happening, the first creation of digitally native national value,” he wrote. We reached out to the Ministry of Digital Transformation of Ukraine to ask for further details on its plans but had not received a response at press time.

The cryptocurrency community has rallied to support Ukraine after Vladimir Putin ordered a Russian military strike last week. Data compiled by Slowmist says that around $34.5 million has been donated to the government and other fundraisers, and that doesn’t factor for the various NFT initiatives that have been launched over the last few days. Countless NFT artists have pledged to donate profits from their sales to Ukrainian relief efforts, while the RELI3F campaign saw a host of the space’s leading figures get together to organize an NFT collection with funds going to Ukraine. It sold out in 30 seconds early Saturday, raising $1 million in the process.