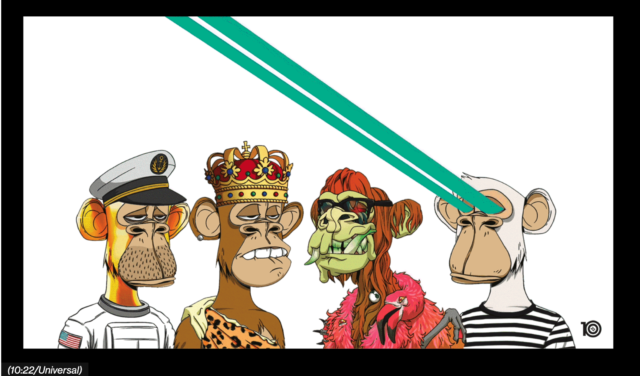 Universal Music Group, often known as UMG, has been a top record label for a very long time – with a big impact on music both from a business and listening perspective.

On Thursday, Universal added to their roster of artists with a bit of a twist. Most people are familiar with music group Gorillaz, who’s look and style was basically a NFT before we knew what it was. UMG has now announced their first NFT band, Kingship.

Kingship is a band consisting of four members – all digital. That’s right, the group has no physical identity and instead they will be an NFT. This has the potential to be a wave that might change how we look at artists. Kingship consists of a Mutant Ape and three Bored Ape characters, including rare Golden Fur and Bluebeam Apes.

Bored Ape and Mutant owners will have early access to the group’s NFT releases and experiences, as well as input on the group’s narrative selection. “Just as we would with any artist or creator, my team and I will work with Kingship to sharpen their vision and develop their unique sound,” said Celine Joshua, founder of the label 10:22PM. Each member of the group has their own story and personality that influences and contributes to Kingships’s overall narrative. 10:22PM will create backstories for the apes and eventually sell NFT performances, that will provide buyers with unique musical experiences. This will also include concerts in the metaverse.

The group represents a “new area of NFT ownership,” said Jimmy McNeils, the owner of the four NFTs that make up the group.

The Latest On NFTs

NFTs have been big hitters for some investors and early birds. The Bored Ape Yacht Club is a collection of thousands of unique digital artwork depicting… bored apes. At the end of October 2021, one ape sold for $3.4 million. Two of the NFTs in Kingship are currently valued at about $125,000, according to online marketplace OpenSea.

The group is using a different approach when it comes to gaining fans. Normally in music and entertainment, content is key in winning fans. Kingship provides you with a cool NFT, but also they are allowing people to get closer to the group by only dropping the backstory. In this way, fans can connect on a deeper level before the music is heard. This approach is certainly risky but also worth a reward if NFT holders are on board.

No clear date is set on an album or single but we are getting to learn more bit by bit on who and what Kingship is and what they represent for both music and crypto NFTs.