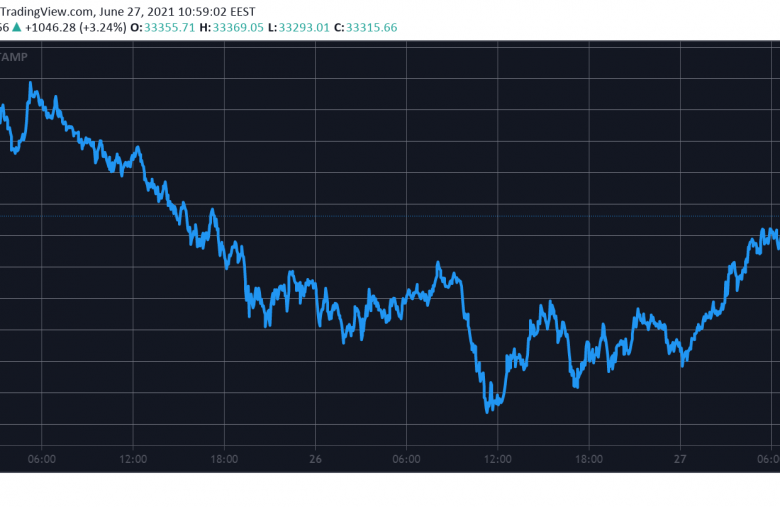 After the Saturday bloodbath in which bitcoin dipped to just over $30,000, the cryptocurrency has bounced off and recovered more than $3,000 of value. Most altcoins have also reacted well, with ETH surging to nearly $1,900, and the market cap has reclaimed $100 billion in a day.

As it happened during the past several weekends, Saturday didn’t start well for the primary cryptocurrency. After the highly volatile week, BTC began to gradually lose value once again on Friday, which continued yesterday as reported.

In a matter of hours, BTC dumped by roughly $3,000 to just over $30,000. While the bears started celebrating and planning their next push, which could have driven bitcoin beneath $30,000 twice in a week, the bulls regained control.

Its market capitalization has reclaimed $600 billion, while its dominance over the altcoins is above 47% once again.

During highly volatile trading days, the alternative coins typically suffer more than their leader, and that was the case yesterday. ETH went from just shy of $2,000 to about $1,700. However, the second-largest crypto has bounced off as well. After adding 6% of value in a day, ether has increased to well above $1,850.

Celo is once again the most significant gainer from the top 100 after a 25% surge since yesterday. On a weekly scale, CELO is 75% up and trades above $4.

The cumulative market capitalization of all cryptocurrency assets has recovered roughly $100 billion since yesterday’s low and is back above $1.3 trillion.