While Bitcoin Energy Concerns Grow, Nobody Discusses the Carbon and Military Violence Backing US Dollars 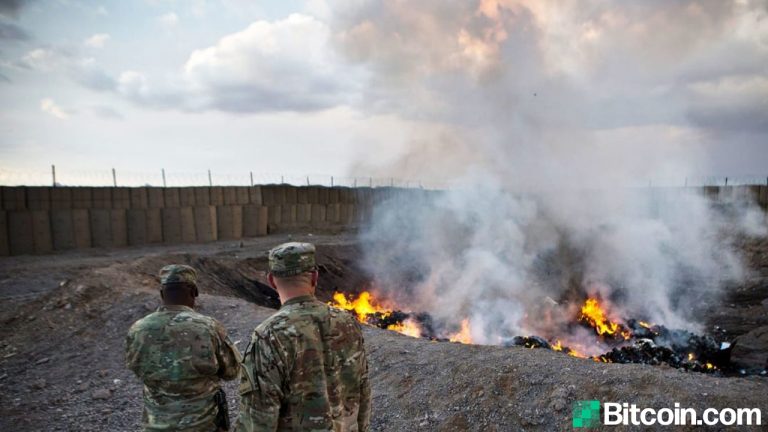 This week a great number of bitcoin supporters and skeptics have been arguing over whether or not bitcoin mining is harmful to the global environment. However, crypto supporters have been saying that concerns over the Bitcoin network’s energy supply are absurd, in contrast to the carbon used and the military violence that backs a number of fiat currencies including the U.S. dollar. One could even go as far as to say that the American dollar alone has left boot prints on large groups of humans over the years and desecrated entire countries.

Elon Musk and his electric car company Tesla ignited a ferocious debate over bitcoin mining and how it affects the global environment. Similarly, the founder of Square and Twitter, Jack Dorsey, added fuel to the argument when his company’s CFO said the payment firm has no current plans to buy more bitcoin (BTC).

Dorsey then tweeted that “changes *everything*…for the better” and further added, “we will forever work to make bitcoin better.”

And we will forever work to make bitcoin better. https://t.co/wssrF2U0P0

However, people have been questioning Musk and Dorsey’s stance, as the two have not discussed the carbon used by the U.S. dollar or the military violence that is tethered to the American currency. Despite the dollar’s obvious problems, Musk and Dorsey’s companies have accepted USD without hesitation.

Moreover, Musk himself has been called out over hypocrisy. The popular stock-to-flow creator “Plan B” shared a photo with Musk of a Tesla car using energy that derived from power stemming from a coal facility in North Dakota.

While ASIC miners are used to process blocks via Bitcoin’s proof-of-work (PoW) system, many people believe the U.S. dollar’s PoW system is backed by a massive carbon footprint and military violence.

It is well known that the U.S. dollar is tied to violence and manipulation that is bolstered by the military-industrial complex. In fact, most people believe the American military occupation abroad and more specifically in the Middle East has been kept there to maintain the U.S. hegemony and petro-dollar.

After Franklin D. Roosevelt (FDR) quite literally flipped the American economy upside down, global financiers invoked the Bretton Woods pact which was the first step in establishing the petro-dollar. These days a great number of economists and analysts have said on multiple occasions that the petro-dollar and the U.S. hegemony is over.

People should ask if Musk and Dorsey have contemplated the proof-of-work behind the U.S. dollar and the petro-dollar’s effects on the global economy. It’s well documented that the American dollar’s consensus algorithm is backed by violent measures and sanctions.

The U.S. dollar has made it so America has been a bully of other nations and feels the need to step in as the world police. But environmentalists have added zero concerns about the U.S. dollar and they gladly accept USD to fund their goals. The founder of Watchdog Capital, Bruce Fenton tweeted about this hypocrisy on Friday. Fenton said:

An M1 Abrams tank uses jet fuel that costs $5 a gallon (3-10x delivered). It burns a gallon a minute when driving, a gallon every 5 min when idle. In Afghanistan, they leave the tanks on all night. The war has been going for two decades. Don’t @ me about Bitcoin energy usage.

Fenton’s critique is quite valid, but people like Elon Musk or Jack Dorsey have yet to address such subjects. The U.S. military, which keeps the dollar going strong, depends on massive amounts of fuel and has one of the largest carbon footprints on earth. This fact is well documented and the U.S. military cannot escape the massive amounts of carbon it uses on a daily basis.

“U.S. military spending is greater than the total military spending of the next seven countries combined: China, Saudi Arabia, India, France, Russia, United Kingdom, and Germany,” explains data from Street Smart Economics. In fact the “price we pay for militarism” is colossal but the U.S. government sweeps it all under the rug.

“This kind of information is readily available,” Street Smart Economics’ author Martin Hart-Landsberg details. “The military’s contribution to global warming is not. One reason is that because of U.S. government pressure, the governments negotiating the 1992 Kyoto Protocol agreed that emissions generated by military activity would not count as national emissions and would not have to be reported. As a consequence, the Intergovernmental Panel on Climate Change, which produces one of the world’s most trusted reports on the rate at which climate change is occurring, does not include national military emissions in its calculations.”

The U.S. military not only leverages carbon every second of the day, but it also burns enormous amounts of chemicals and trash. When the burn pit story broke in October 2008,” explains Kelly Kennedy. “The military burned 250 tons of trash a day in an open pit at Joint Base Balad in Iraq, dioxin, the same Agent Orange chemical notorious for sickening service members during the Vietnam War, drifted through the air in a black plume to poison the air of troops living nearby.”

On June 24, 2019, the website theconversation.com tried to initiate a conversation about U.S. military spending and its carbon footprint. The three authors Benjamin Neimark, Oliver Belcher, and Patrick Bigger show data that indicates “the U.S. military is a bigger polluter than as many as 140 countries.” The researchers’ study highlights how the U.S. military leverages carbon-based fuels more so than any entity in history.

“The U.S. military is one of the largest polluters in history, consuming more liquid fuels and emitting more climate-changing gases than most medium-sized countries,” The researchers’ study insists. “If the US military were a country, its fuel usage alone would make it the 47th largest emitter of greenhouse gases in the world, sitting between Peru and Portugal.”

There is countless evidence that shows the U.S. military is used to bolster the country’s currency and keep it in place as the world reserve currency. Historical records show that the U.S. government’s proof-of-work system for the U.S. dollar was not a fairly distributed peer-to-peer currency system.

For 300 years or more now the global elite has manipulated ledgers and created an immoral social and financial ranking system. Elon Musk and the rest of the so-called environmentalists speaking out against the Bitcoin network should really consider what the U.S. dollar has done and what the fiat currency continues to do.