Research firm Messari published a report on the performance of 5 sectors in the crypto industry after the recent crash. Written by Roberto Talamas, the report determined that smart contracts (Solana, Cosmos, Polkadot, Kusama, and others) have been amongst the least affected by this event.

Relentless selling pressure caused the main cryptocurrencies to correct by more than 50% in mid-May. On June 3rd the crypto market closed on a positive for the first time since that moment. As Talamas noted, the smart contract sector saw an overall return of 3.11% in assets such as Solana, DOT, ATOM, KSM, CKB.

As seen in the char, DeFi projects and decentralized exchanges have equal returns with 2.70% followed by cryptocurrencies with the least returns after web3 applications. In general, the crypto market’s performance for the week of June 3rd was a “bit bumpy”, the researcher said. He added:

Asset prices across the board tumbled by mid-week resulting in losses of 10-25%. Starting on May 30th, portfolio returns found some footing as prices bounced back regaining some of the performance from earlier in the week.

Solana And The Crypto Market Hit By A High Volatility

During the week, Talamas saw a V-shaped pattern of the studied sectors hint at a potential recovery. However, DeFi and Web3 began started to underperform by the end of the week and saw moderate losses.

Chainlink (LINK), Uniswap (UNI), and Aave (AAVE) were the worst-performing assets in the Web3 and DeFi sectors, respectively. UNI and AAVE saw around 3.5 and 4.7% losses while LINK had a 6% loss during the same period.

This suggests an increase in volatility. On the subject, Talamas said:

(Volatility) remains elevated across all sector portfolios following the spike that was triggered by the market crash in mid-May. Before the crash, volatility across sectors was roughly the same, ranging from 3-6%. After the crash, sector volatility has become widely dispersed.

With volatility, the correlation between Solana and all the assets has also increased. This metric reached 85% and 95% for certain pairs.

As seen below, the correlation with the market’s dominant asset, Bitcoin, has been steadily increasing. Talamas pointed out that this trend began at the beginning of May. During this period, some cryptocurrencies started to record losses.

The DeFi and DEX sector are the most correlated to Bitcoin with Solana and the Smart Contract platform recording the least correlation with an increase of 20% in the last month. Talamas also noted the following:

The correlation between Ethereum and all sector portfolios is now equal to or above 90%. Aside from the portfolios that have a hefty allocation to Ethereum (Smart Contract Platforms and Top Assets), the DeFi and DEX portfolios are the ones with the highest correlation coefficients standing at 94% and 93% respectively.

At the time of writing Solana (SOL) trades at $38,83 with small losses in the daily chart and a 15.4% profit in the 7-dar chart. SOL’s recovery appears to be showing the highest conviction and could quickly return to previous highs if the trend continues. 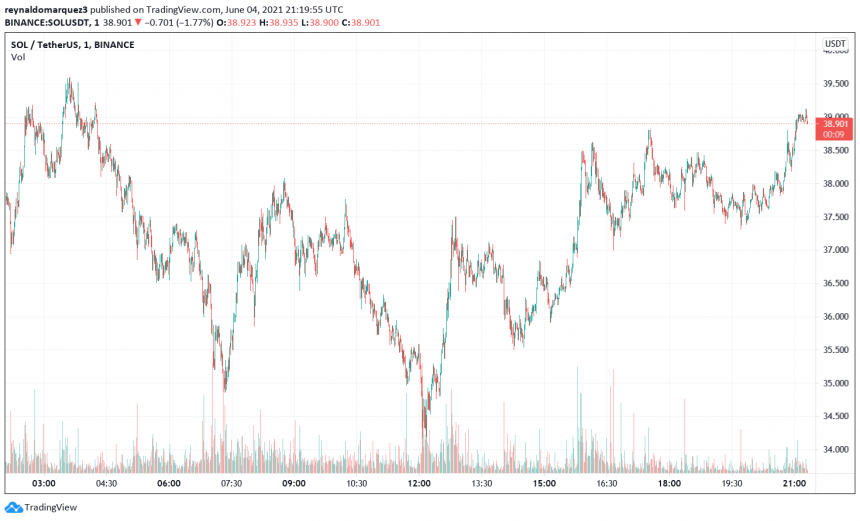